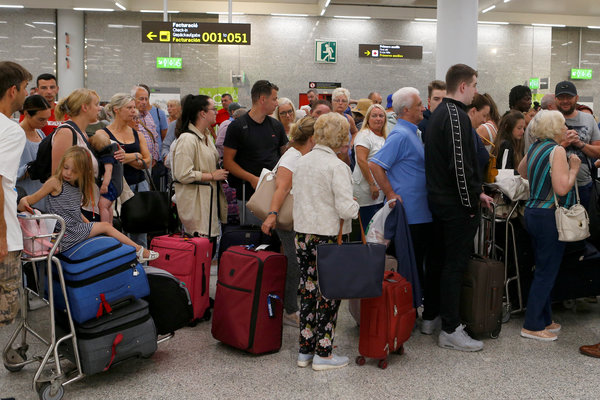 Thousands Of Passengers Stranded As Thomas Cook Files For Bankruptcy

Hundreds of thousands of travelers have been left stranded after the world’s oldest tour company Thomas Cook abruptly declared bankruptcy. The announcement comes as a shock for vacationers as many of them were still in the air when the company announced that it’s going out of the business. The airline has stopped operating flights and ticket sales have ceased. The company issued a statement saying Thomas Cook, which ran hotels, resorts, and airlines for over 19 million people a year in across 16 countries, has ceased trading with immediate effect. This has left over hundreds of thousands of passengers clueless with many of them stuck in different vacation hot spots around the world.

Worried holidaymakers took to microblogging site Twitter to express their concern and asked the company for updates and any clarification.  Meanwhile, British officials have launched a massive operation to bring home its travelers. The operation, named as Operation Matterhorn, will use wet-leased aircraft along with planes for other airlines for this rescue mission. The mission will take time to complete as British travelers are stranded as far away as Malaysia. There are reports that around 50,000 travelers are stranded on the islands of Kos, Zakynthos, Skiathos, Corfu, and Crete in Greece. According to Civil Aviation Authority of Britain,  it had arranged 60 flights to get British travelers home and that the effort would extend until October 6.

Thomas Cook, founded in the year 1841, changed the way of traveling and it financial collapse would deal a big blow to hoteliers as many of the vacation packages were not prepaid. The company was trying to get a bailout package by things went wrong at last. The British government too refused to help Thomas Cook. British Prime Minister Boris Johnson revealed request for a bailout package of USD 187 million by Thomas Cook has rejected as doing so would have set up a moral hazard. However, he didn’t reveal his government’s strategy to deal with the circumstance that developed after 178 years old company declared bankruptcy.