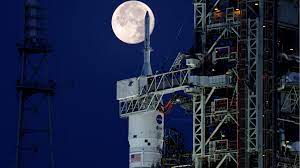 Suppose NASA were to successfully launch its giant Space Launch System (SLS) rocket on Monday from the Kennedy Space Center in Florida according to plan. In that case, this event will mark the very first launch vehicle to be able to send humans to the Moon in over 50 years.

This event could be even more important for the commercial space industry. It can represent the ending of the existing way of operations for the US space agency, at the same time, the beginning of a modern era for international as well as commercial cooperation in space.

The SLS has the same height as a 30-story building and is comparatively more powerful than the Saturn V rockets, which were part of the Apollo missions to the Moon.

A NASA auditor said that getting the vehicle to the launch pad took almost 11 years, almost twice the time Saturn V took, and will cost American taxpayers US$29.5bn by 2025. It is the main focus of the Artemis program, which cost US$93 billion, and was developed to send humans back to the Moon by 2025; it also became a launch pad that will be used to reach mars in the longer run.

NASA plans to bring the SLS around for launch every 2 years, costing US$2.2 billion each time, along with another US$1 billion investment to develop the Orion spacecraft that will power the SLS. Therefore, the total cost spent on every Artemis program will be US$4.1 billion according to the space agency.

Laura Forczyk, a US space analyst, said that the SLS would be a “monumental achievement,” but on the other hand, she forecasted that it is not expected to be in operation for a long time for US space exploration.

Boeing, the prime contractor of NASA, says that it is looking for different options to lower the cost of SLS launches in the future. Late last year, NASA’s auditor wrote that to achieve the aim of sending a human on a secure spacewalk for a long time then, he needed to find options for cheaper commercial alternatives to the SLS.

These alternatives are anticipated to include a series of heavy-launched missiles, which comes with different degrees of reusability in order to lower costs. Blue Origin’s New Glenn, SpaceX’s Starship, and the Vulcan rocket, which is in the process of being developed by United Launch Alliance, a joint project between Lockheed Martin and Boeing; with all waiting for their first test flights.

The Artemis program’s continuous delays and costs somewhat represent political reversals in their path to reaching the final plan. The earlier Constellation program was abandoned by the Obama administration in order to return to the Moon just before the Trump administration decided to go with the current fixed duration, a lapse of over six years.

The SLS is a testament to how the space agency has managed to operate most of its existence. The vehicle was developed on a cost-plus basis, which NASA eventually recovers from the control and reimburses contractors for their costs.

Bill Nelson, an administrator at NASA, said that these cost-plus contracts used to be one of the existing ways to do business. He said, without specifically commenting on the SLS, that these arrangements ended up motivating firms to bid low so that they could win contracts, which leaves the space agency with no option but to cover significant cost overruns.

The Artemis program will end up offering a glimpse into the future of space exploration and aims to prove the old ways devoid of progressive methodologies that are better equipped to manage extensive space projects. It is likely to include a variety of factors under different fixed-price contract options, which includes a contract from SpaceX to develop a Moon lander. This contract was opposed by Blue Origin, as such, NASA seeks to rectify any discrepancies by making a legal agreement for a second lander.

In addition, the Artemis program includes additional components at fixed prices needed to operate this project, including the contracting of certain private firms to facilitate necessary equipment to the Lunar’s surface.