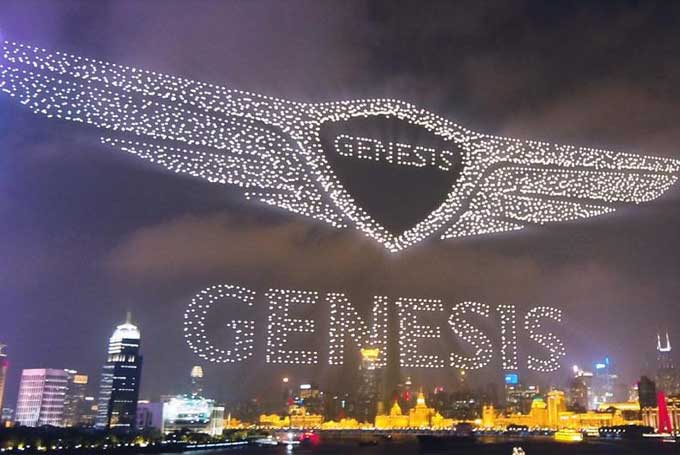 Genesis Grabs Attention By Flying Record-Breaking 3,281 Drones In The Sky

Drones are quickly gaining attention and every industry is working on war footing to make them their part. This is the reason drone shows have become extremely popular these days. These shows are also an opportunity for companies that want to grab your attention. It seems Genesis knows this better and this is why it did something recently that has forced everyone to talk about it. The Hyundai-owned luxury vehicle brand marked has entered into the Chinese market by doing something spectacular with the help of unmanned aerial vehicles. The company used the maximum number of drones in the air at the same to create the logo of Genesis over Shanghai. The company created a new record for using the most number of drones simultaneously in the air and broke the previous Guinness World Record as well.

This is a significant improvement from the previous record in which 3,051 unmanned aerial vehicles were used. The previous record was held by Shenzhen Damoda Intelligent Control Technology. The company itself created this record by breaking the previous best of 2,200 drone performance in Russia. Intel, which has been a well-known name in the drone light shows, too held a record for some time. The company had the record of taking 2,066 drones in the air simultaneously over Folsom, California. Intel achieved this feat way back in 2018.

As mentioned, the drone was a massive publicity stunt for the company as it enters the Chinese market. Markus Henne, Chief Executive Officer of Genesis Motor China, said that it was a very special opportunity to have an engagement with our audience in the country and give them a glimpse of what Genesis is about. “With this record-breaking show of unmanned aerial vehicles, Genesis has brought its brand story as well as philosophy to life. The company is doing everything to bring more such amazing experiences and products for Chinese consumers,” Henne said. The company recently unveiled its mid-sized luxury sedan Genesis G80, the first SUV in its lineup Genesis GV80 during the Brand Night even in Shanghai.