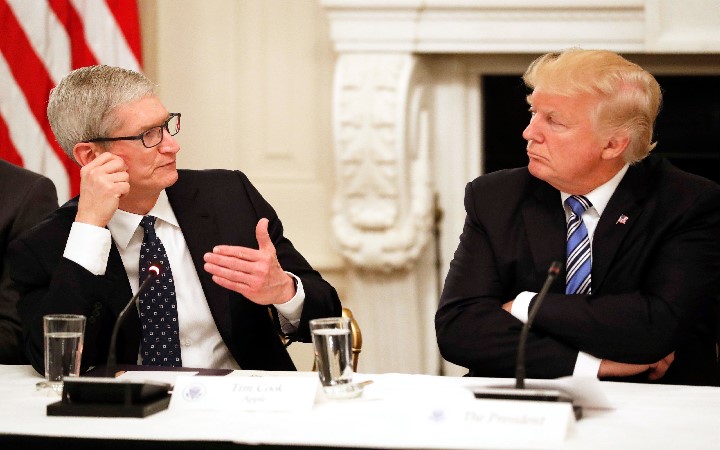 Donald Trump Asks Tim Cook to Produce iPhones in the US

It’s known that Donald Trump and the Apple CEO, Tim Cook, are good friends. However, this friendship may not help Apple in staying away from the repercussions of the US-China trade-war. According to latest reports, Donald Trump has asked Tim Cook to produce iPhone products in US-based facilities itself, instead of going for manufacturing centers in China. It’s one of the important demands every raised by Trump.

“Apple makes their product in China. I told Tim Cook, who’s a friend of mine, who I like a lot, ‘Make your product in the United States. Build those big, beautiful plants’ – that go on for miles, it seems – ‘build those plants in the United States. I like that even better,” Donald Trump was quoted saying. It’s almost clear that the POTUS doesn’t care about the monetary concerns the company may have.

This news comes at a time when Apple has reported one of the worst financial times. Due to the trade-war between the United States and China, Apple product demand in China has been decreasing, forcing Apple to even cut down its revenue forecasts. At the same time, increasing popularity of indigenous manufacturers in China is also troubling the company.

It is not clear how Apple is going to take this suggestion. One of the reasons why Apple manufacturers iPhone and many other products in China is definitely the cheaper availability of resources. Shifting manufacturing to the US would cause further issues as well. It seems Donald Trump is not really concerned about the lower profits of Apple.

“No, I’m not. I mean, look, they’ve gone up a lot. You know, they’ve gone up hundreds of percent since I’m president [sic]. Apple was at a number that was incredible, and they’re going to be fine. Apple is a great company,” said the president when he was asked about the recent revenue warning that Apple had released.