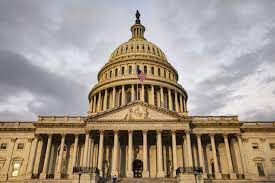 The US Senate approved a bill worth US$369 billion for climate action. This is the largest American investment ever made in its history. The Inflation Reduction Act will cut the country’s carbon emissions by 40% by 2030. Some households could receive a tax credit of up to US$7,500 to buy an electric car and US$4,000 to buy a used vehicle.

The bill, a key component of President Joe Biden’s agenda, will now be sent to the Democrat-controlled house. It will be supported there by the end of this week before being signed into law.

Devastating floods and wildfires have ravaged the US in recent years. Climate change continues to increase the likelihood of hot and dry weather that could fuel a greater number of wildfires. The world has warmed by 1.1°C since the Industrial Era began. Temperatures will continue rising unless there are drastic cuts made to carbon emissions by governments around the globe. After a long, exhausting overnight session, Democrats wept with joy after the bill was passed in the Senate. It was the result of 18 months of intensive wrangling.

It proposes increasing corporate taxes and lowering healthcare costs as part of a package exceeding US$700Bn, which will be self-paying, according to the White House. The Democrats worked together for months to make sure the bill got the support of all 50 of their senators. This was required, along with Vice-President Kamala Harris’s tiebreaking vote, to pass the Senate.

The compromise reached is a much smaller version of the far more expansive measure many Democrats had hoped for last year’s approval. Chuck Schumer, Democratic Senate Majority Leader, stated that the Senate had made history after more than a decade of hard work. He said, “To Americans who have lost faith in Congress’ ability to do big things. This bill is for them.”

According to the New York Times, “he could now look at his child and see that we are doing something about climate change.” Some Republicans claim they will try and halt or block the bill’s progress. It also includes US$64bn for healthcare endeavors.
Florida Republican Senator Marco Rubio claimed that the bill was “too out of touch” because it didn’t lower prices for workers or keep criminals behind bars. After compromises with Senators Joe Manchin (West Virginia) and Kyrsten Sinema (Arizona), Congress deliberated a revised bill on Saturday.

Manchin feared that the original bill would increase inflation. The bill includes industry measures, including tax credits for clean-energy development. These will reduce the initial costs. To help develop renewable technologies, a new US$27 billion “clean energy technology accelerator” will be established.

Communities that have suffered the greatest from fossil fuel pollution will receive US$60 billion. Biden, who called the bill “historic,” has promised to bring the US back to the international climate action stage. He pledged in April to reduce US greenhouse gas emissions at least halfway by 2030. He announced last month that US$2.2bn would be used to build an infrastructure capable of withstanding severe weather and natural catastrophes.

The US is Back in the Climate Battle
It is not the climate mega-bill Joe Biden promised to be when he was elected president. But, if it passes, it will be the most ambitious US action to reduce global warming. The indirect effects could even be more significant.

Senator John Kerry, President Biden’s climate ambassador, has worked tirelessly to convince other countries to increase their ambitions in climate change. The US was still unable to establish credibility. It’s an immense task, and relations with China are already strained. Beijing stated that it has stopped cooperating on climate change after Nancy Pelosi, a senior Democrat, visited Taiwan.
The US is a shining example, and international efforts to combat global warming should be revived.