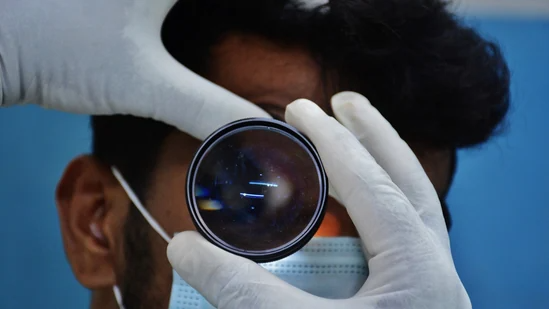 A new study has shown that nerve damage and a cluster of immune cells in the cornea might be a symptom of long COVID. Long COVID is a syndrome that takes place in people who have recovered from COVID19 infection. Health experts have said that the findings of the study need to be tested among a larger group of people who are dealing with long COVID. People who are suffering from symptoms of long COVID are known as COVID19 long haulers. Experts have said that COVID19 long haulers suffer from a wide range of symptoms such as neurological issues, headaches, loss of smell and taste, brain fog, and numbness in the body. Dr. Riyaz Malik, the senior author of the new study, has said that this set of symptoms shows that long COVID might be triggered by the damage to nerve cells in the body. Dr. Riyaz Malik works as a professor of medicine and consultant physician at Weill Cornell Medicine-Qatar in Doha. The authors of the new study have said that primary results particularly show that long COVID might be led by the damage to small nerve fibers. Small nerve fibers are thin wires that extend off to specific nerve cells in the body and transmit sensory details about pain, temperature, and skin irritation along with other sensations to the central nervous system. Experts have said that small-fiber nerve cells facilitate control of reflex bodily roles like heart rate and bowel movements. Therefore, damage to these nerve cells can lead to a wide range of symptoms. The results of the new study have been released in the British Journal of Ophthalmology.

The authors of the study have analyzed small-fiber nerve loss in people who have been dealing with diabetes and neurodegenerative ailments such as multiple sclerosis. The findings of the study have shown that people who are dealing with long COVID are diagnosed with the same set of symptoms as these patients. That is the reason; they have decided to examine a possible link. Health experts have used a technique that is known as corneal confocal microscopy (CCM). The team of experts has taken snapshots of nerve cells in the cornea that is a thin translucent sheet of the eye that envelops the pupils and iris. With the help of a non-invasive procedure, the authors of the study have counted the total number of small-fiber nerve cells in the cornea. They have also assessed the length and degree of branching of those fibers. After adjusting other conditions, health experts have found that when there is damage in the small-fiber nerves of the cornea that often shows that there is a similar type of damage somewhere else in the body. Dr. Riyaz Malik has said that it is like a barometer of nerve damage. The outcomes of the study have revealed that people who deal with neurological issues after recovering from COVID19 infection are often diagnosed with major damage to small-fiber nerve cells in the cornea as compared to COVID19 survivors who do not have any lingering symptoms of neurological issues. The authors of the study have said that the degree of nerve-fiber damage is linked to the severity of symptoms of the participants that means higher nerve damage is associated with more severe symptoms of long COVID.

Experts have enrolled 40 people who have survived COVID19 within one to six months before their assessment. Around 29 people out of 40 participants have recovered from the disease at least three months before the start of the study. Along with corneal scans, all participants have gone through a survey that has included questions about their symptoms of neurological issues. As per the UC Davis Health, the survey has included questions about neuropathic pain, numbing, prickling, and burning feeling, and muscle weakness as well in the body. Another survey has included inquiries that have helped authors to find out the location and severity of the muscle pain of the participants. It has helped experts to pin down other symptoms as well such as fatigue and bowel issues. As per the new study, nearly 22 participants have been diagnosed with lingering neurological symptoms such as headache, dizziness, and numbness four weeks after surviving their initial COVID19 infections. Nearly 13 participants who have been enrolled in the study three months after recovery have started having symptoms of neurological issues at the 12th week after recovery. The authors of the study have said that the findings of the study clearly show that people who have been dealing with neurological symptoms post COVID19 recovery are found with a reduction in the number of small-fiber nerve cells. The authors of the study have observed 30 healthy people who have never been diagnosed with COVID19 in the past. Health experts have said that people who have been infected with COVID19 in the past have been found with a large number of immune cells in their corneas as compared to people who have never contracted the virus. They have noted that people who have recovered from the disease have been identified with unusually high amounts of specific immune cells known as dendritic cells in their corneas that help notify the immune system about foreign invaders. People who have been dealing with lingering symptoms of long COVID have been found with around a fivefold increase in the number of dendritic cells as compared to healthy participants. People who have not been dealing with neurological issues have been identified with a twofold increase in the number of dendritic cells in their corneas. The lead author of the study has said that it shows that there is an ongoing immune process even after recovery. He has said that the immune response to COVID19 might take a little time to settle down among long haulers. Meanwhile, the continuous immune process after recovery leads to damage to nerve cells. Although the findings cannot confirm that the nerve damage is caused by the immune response, findings do align with the current evidence that the majority of neurological damage due to COVID19 is led by inflammation, said the experts.