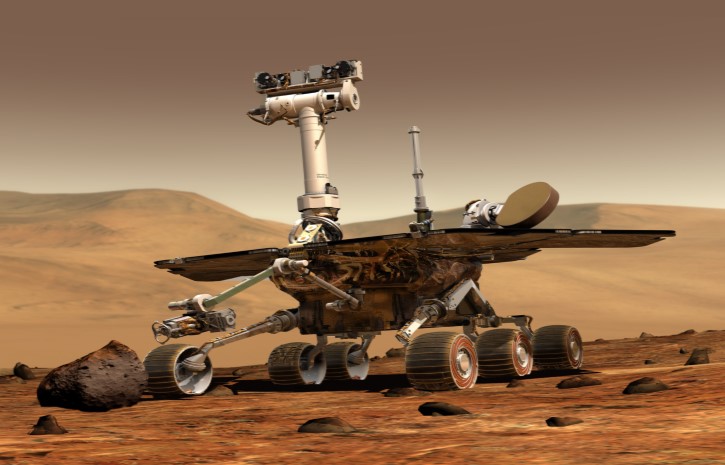 China’s National Space Administration (CNSA) has published new photos of Mars captured by its historic Tianwen-1 mission. Tianwen-1, which means “search for celestial truth,” consists of an orbiter, lander, and a six-wheeled rover bearing scientific equipment. It successfully managed to enter Mars’ orbit in February, after a seven-month journey through space following a July 2020 launch.

In May, the Zhurong rover was driven off its landing pad, and onto the surface of Mars, where it began its mission of patrolling and investigating a specified surface area. With this accomplishment, China became just the second country after the United States to land and operate a rover on Mars. As of June 27th, the Tianwen-1 orbiter had been in flight for 338 days,” the CNSA announced in a statement on Sunday. The ‘Zhurong’ rover has been operating on Mars’ surface for 42 Martian days and has covered a total of 236 meters. The orbiter and rover are in excellent operational order. China is the first country to attempt to launch both an orbiter and a rover on its maiden domestic Mars voyage, the Tianwen-1. To ensure a successful landing of the rover on the surface of Mars, Nasa rehearsed flight patterns through the use of multiple orbiters.

In addition to expedition images shared Chinese government earlier this month, CNSA has now published a sting of photos taken by its rover over the course of its latest excursions. The CNSA anticipates that the mission will collect crucial data regarding Mars’ geological structure, atmosphere, climate, and soil, as well as look for traces of water. China has an ambitious space program, and Tianwen-1 places it as the sixth country to orbit Mars.

China aims to launch its first manned trip to Mars in 2033, as it pursues its space aspirations in a race with the United States. China detailed its Mars objectives for the first time this month during a space conference in Russia. It comes only weeks after China successfully landed Zhurong on Mars. China intends to deploy robots to explore Mars, study its surface, and help choose a location for a base. The next step would be to deploy humans to Mars to construct a base station. It also plans to conduct these missions in the years 2033, 2035, 2037, 2041, and 2043, and has stated that it will pursue technologies to carry astronauts back to Earth. As part of a larger technology war with the US, China aims to lead in the space frontier as well. NASA has stated that it intends to send people to Mars by the 2030s.