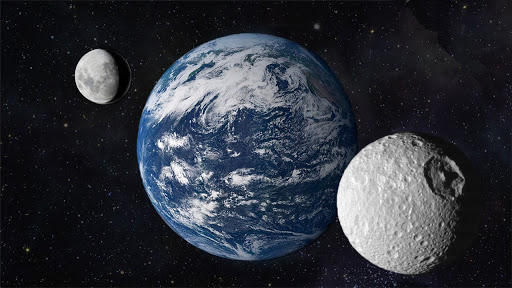 In the latest study, scientists have discovered the second mini-moon around the earth. A mini-moon can be defined as an object orbiting a planet, but it is not a real moon. Experts have said that the second moon has been orbiting the earth for the last 2.7 years. They have found many interesting facts about this strange space object since then. Scientists have named this mini-moon as 2020 CD3. A report has disclosed that it has come quite close to the earth recently. It has been spotted at 8100 miles far from the earth, which is the closest it has ever been seen by the experts. It is the only second temporary natural satellite found near the earth. Asteroid 2020 CD3 has been spotted by astronomers from the Catalina Sky Survey at the University of Arizona.

Experts have made some preliminary observations about the size and the rate of rotation of this mini-moon. They have examined the changing levels of brightness of the mini-moon. It has been found that the rate of rotation of this mysterious object is around 3 minutes. The data have been gathered with the help of the Lowell Discovery Telescope (LDT). As per the experts, it is a car-sized asteroid. It has been a matter of interest for many experts since it has been discovered. Earlier, scientists have thought that it is a man-made object. Some experts have believed that it is a remnant of a space shuttle, which has been launched decades ago. Now, astronomers have used a Large Monolithic Imager on LDT to analyze the rotation of CD3. They have confirmed that it is an asteroid considering its brightness and rotation. NASA’s Center for Near-Earth Objects and The Minor Planet Center have termed it as a near-earth asteroid.

The authors of the study believe that 2020 CD3 might be a fragment that has been broken off from a big asteroid and later it has originated somewhere between Mars and Jupiter. The first mini moon RH120 has been spotted in 2006. Astronomers have said these mini-moons have set good future targets. These mini-moons significantly bring the asteroid belts close to the earth, which will allow experts to touch them and collect the samples. Scientists have said that it is great that a modern astronomical telescope can spot mini-moons the size of big rocks, which are as far away as the moon.