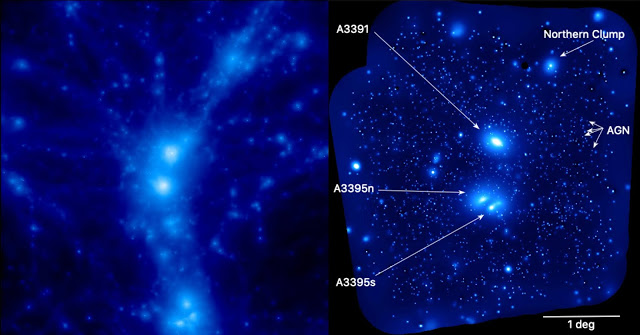 Experts have revealed that there is more than half of the matter existing in the universe, which is hidden from us. However, scientists have found where this hidden matter might be located. They have said that it might be in the form of incomprehensibly large filaments, which is a thread-like formation of hot gas. These filaments encircle and join galaxies and galaxy clusters. A team of scientists from the University of Bonn has found a hot gas filament of a length of 50 million light-years for the first time. The formation of this filament is quite similar to the forecasts of computer simulations, said the experts. The study has confirmed widely known ideas about the origin and evolution of the universe. The findings of the study have been released in the journal called Astronomy And Astrophysics. As per the Big Bang theory, the universe has been created around 13.8 million years ago. It has been marked as the beginning of space, time, and all matter, which exists in the universe at present. As per the experts, it has been concentrated at one point and later it expanded at rapid speed into a massive gas cloud in which matter has been evenly distributed.
Experts have said that the cloud has been a little thicker in some areas, this is the reason we have stars, galaxies, and planets. The denser areas of the cloud have exerted higher gravitational forces drawing the gases around them towards these areas. Over time, this led to more and more matter to get concentrated in these areas, whereas, the space between them getting more empty. In the course of 13 billion years, this has led to space having a sponge-like structure with large empty spaces with no matter and areas with thousands of galaxies concentrated in a small space, sometimes called galaxy clusters. Experts have said that going by this theory, the galaxies, and clusters might be still joined by remnants of this gas, like the flimsy thin threads of a spider web. The study has shown that more than half of all baryonic substances of the universe are hidden in these filaments.
The lead author of the study Dr. Thomas Reiprich from the Argelander Institute for Astronomy at the University of Bonn has sad that, these filaments have not been identified until now. He has said that matter exists in these filaments in diluted form due to the huge expansion of filaments. The filaments have just ten particles per cubic meter, which is very less than the best vacuum; scientists are able to create on Earth. With the help of the eROSITA Space telescope, the lead author and his teammates have been able to make the gas fully detectable for the first time. Sensitive detectors of the eROSITA Space telescope can easily identify the type of X-ray radiation that stems from the gas in the filaments. This telescope can capture a large part of the sky at a high resolution in a single measurement with the help of a large field of view such as a wide-angle view. Experts have examined a space object called Abell 3391/95, which is a network of three galaxy clusters. Experts have said that the space object is around 700 million light-years away from Earth. The eROSITA Space telescope has not only shown the clusters and different galaxies but it has been able to show the gas filaments, which joins these structures. Experts have said that the entire filament is of a length of 50 million light-years. However, experts think that it might be even massive, as the telescope has shown only a section of the filament. Scientists have compared the findings of the study with the outcomes of a computerized simulation, which recreates the origin, and evolution of the universe. They have found that the images taken by the eROSITA Space telescope and the graphics of computerized simulations are noticeably similar. It shows that the widely accepted theory of the origin and evolution of the universe is right. As per the report, around 50 scientists from the US, Germany, Switzerland, Chile, Australia, Spain, South Africa, and Japan have done the study. The eROSITA Space telescope has been launched via a Russian-German satellite, which has been made by the Russian Space Agency Roscosmos.