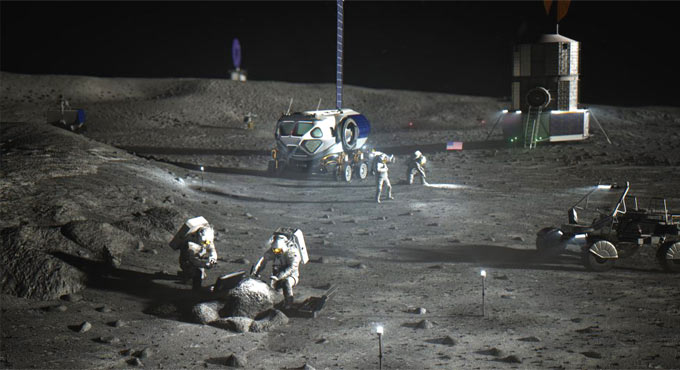 NASA is moving ahead with its Artemis mission. The space agency is now busy picking up the right location on the Moon where it wants to set up a base camp. Choosing the right place on the lunar surface is crucial for the mission. It will determine the success of the agency’s future missions. NASA is planning to land the first woman on Earth’s natural satellite and the next man on Moon under its Artemis mission. If all goes well, humans will set their foot on Moon in 2024. The agency wants to set up a base camp on Moon. It will assist the agency in its future mission. NASA wants to use the camp to conduct human exploration of Mars. Besides, it also wants to send humans deep into space.

According to NASA, scientists and engineers are assisting it in deciding the right location. Several factors like temperature, darkness, frozen water and others are being considered to finalize the site. The most important factor in selecting a site is that it must receive continuous sunlight. Sunlight is the only source available on Moon for now to power the base. The agency is targeting to set up a base on the South Pole. It is a region that is full of extreme environments. Some regions are either extremely cold or continuously illuminated in sunlight/darkness. The region has the potential to fuel the base camp.

Under the Artemis program, NASA will launch three spacecraft. While the first will be an unmanned mission, the second will be a crewed flight that will conduct flyby and return to Earth. The third spacecraft will take humans to Moon. The agency has already identified key science goals for the mission. The two astronauts are likely to spend roughly seven days on Moon and conduct experiments before returning to Earth. Astronauts will bring back a variety of Moon’s surface and sub-surface samples. The last time humans set their foot on Moon was in 1972.