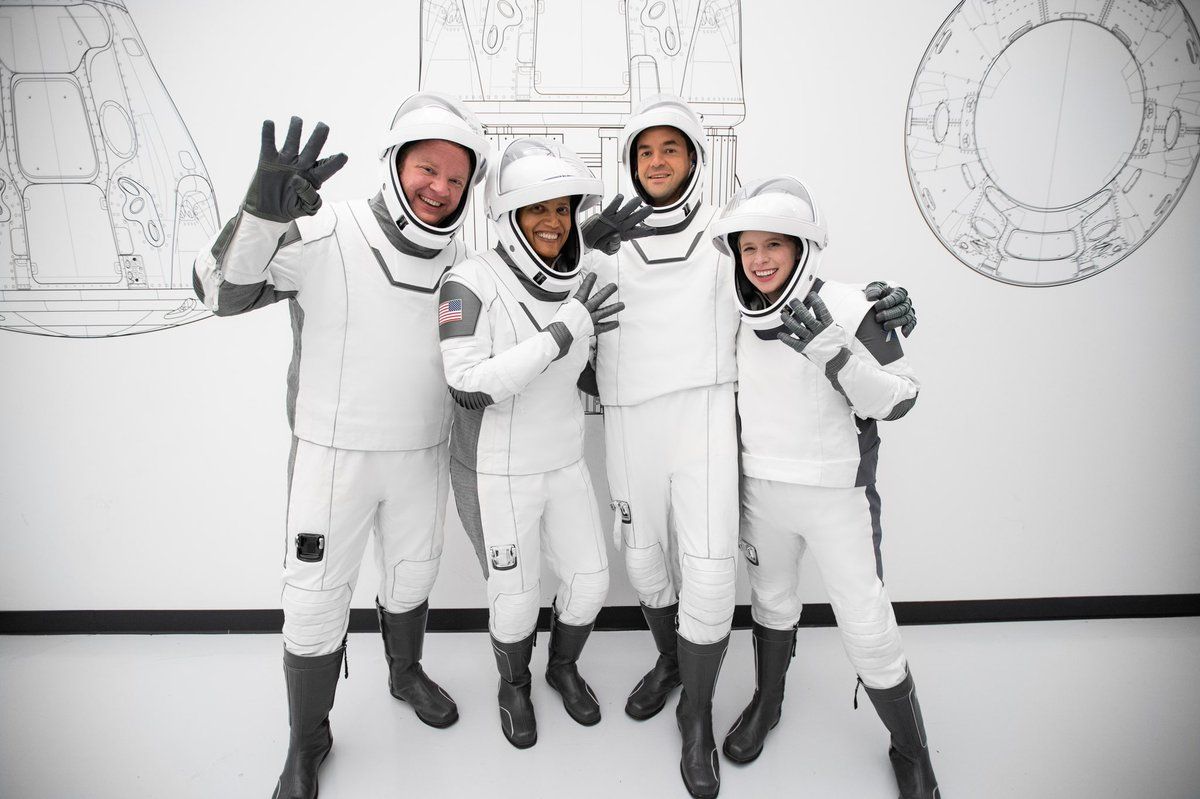 The four-member civilian crew aboard SpaceX’s Inspiration4 mission created history last month by spending three days in the space. The mission was special in many ways and the most important was that they flew even higher than the International Space Station. All four private space travelers have not officially got their astronaut wings. The civilian crew rode a Dragon spacecraft of SpaceX to soar into orbit on September 15. The crew remained in space for three days and landed back on earth onboard a SpaceX capsule. The members of the mission have now received their astronaut wings from SpaceX. Astronaut wings were presented to them during a presentation at the company’s headquarters in Hawthorne, California. Crew members shared their feelings on the microblogging site Twitter. Hayley Arceneaux, who served as the mission’s medical officer, said that astronaut wings mean everything to her. “We have been presented with our SpaceX astronaut wings. This is really beautiful and means a lot to me.” Arceneaux went on to show that the moment made her emotional. “Also if it looks like I’m crying, mind your business,” she added. Sian Proctor, a geoscientist who served as the Inspiration4 pilot during the mission too shared similar emotions. “I cried when I got my astronaut wings,” Proctor tweeted.

Astronaut wings pin presented by SpaceX has a crew Dragon capsule at the center. A dragon’s head appears to be emerging from the center with its wings open. The name, call sign, and mission role is inscribed at the back of the astronaut wing pin. Inspiration4 was a privately financed three-day commercial space mission. Billionaire and American entrepreneur Jared Isaacman had paid for the mission. He bought four seats on a SpaceX Dragon and Falcon 9 rocket for an undisclosed amount and donated three of them. Isaacman had said that he donated seats to raise awareness about childhood cancer research and also raise USD 200 million for St. Jude Children’s Research Hospital. The hospital was represented by Arceneaux. She is a bone cancer survivor and also a St. Jude physician’s assistant. The two other crew members were chosen through public contests. Proctor and Chris Sembroski were the two who were selected for the first all-civilian crew to space. While Sembroski is an aerospace data engineer, Proctor became the first black woman spaceship pilot. This was the first time when civilians flew to space without the presence of any professional astronaut.

During their three days’ stay in space, the Inspiration4 crew circled around the Earth and performed certain experiments. In order to let crew members have a better view of space and the Earth, SpaceX had attached a dome-shaped cupola to the nose of the capsule. All the crew members of the Inspiration4 team were invited by SpaceX at its headquarters to share their experiences. Presenting astronaut wings to them was a surprise for the crew members. “Crew members of our Inspiration4 mission visited SpaceX’s headquarters. They were surprised to receive SpaceX Dragon wings,” the outreach team of Inspiration4 tweeted. Isaacman thanked Elon Musk’s company for the flight. “It was an amazing experience. I want to thank all the friends of SpaceX for making this mission a success. We have some incredible memories.” Isaacman wrote on Twitter. It is pertinent to mention that the flight was not totally perfect from a technical standpoint. The crew faced issues related to the fan of the waste management system during their stay in the space. However, the issue was resolved by implementing a ‘backup plan.’ But there was never a safety concern for crew members.