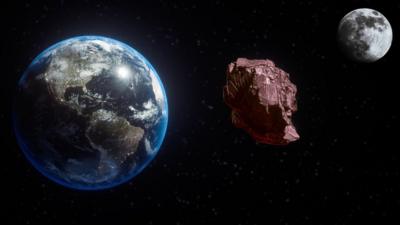 Kamo’oalewa, a near-Earth glowing asteroid, could be a lost piece of Moon. Kamo’oalewa in Hawaiian means a celestial object that is moving. The asteroid can be seen every April and circles our Earth. However, there is no traditional path that if follows. Instead, researchers have said that it circles in a corkscrew-like trajectory. Also, it is very small in size and measures just 50 meters or 164 feet across. Researchers who have discovered Kamo’oalewa said that its orbit is like a dance. So those who have for long envied Saturn or Jupiter for their many moons, the discovery suggests that we may have a second moon. It was first discovered in 2016.

It is basically under the influence of the gravity of the sun but the pattern suggests that it is also following an Earth-like orbit. However, it is not quite like that. “So it is a kind of odd dance,” said researchers who have been observing the Kamo’oalewa. Researchers said in their study that they have several reasons to believe that it is part of the moon. It is well known that the earth’s celestial body is constantly being bombarded by celestial objects. So it is very logical that a piece of it might have broken away and then ended up in the vicinity of Earth.

Benjamin Sharkey, who is the lead author of the study, said that they tried to match the material of Kamo’oalewa with the behavior of asteroids that the scientific community has studied so far. Sharkey said after a failed attempt to find a match, they started to look at lunar material. The astronomers also found that there was some similarity between the asteroid and the rocks recovered from the Apollo missions. Apollo mission was sent in 1971 and it brought back samples of the moon. This clearly indicates that the Kamo’oalewa is part of our already existing moon. Also, this makes it a second moon to our planet.