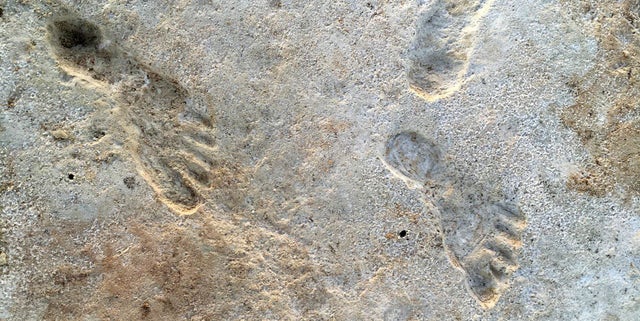 Fossilized footprints discovered in the United States may contain the solution to a long-unanswered issue for researchers: When did the very first humans arrive in the Americas after migrating from Asia and Africa? The tracks were discovered by researchers digging a trench in the gypsum soil on the western playa of the White Sands National Park, New Mexico. The footprints were at various depths underneath the surface, with old grass seeds below and above them. Scientists from the US Geological Survey analyzed the seeds using radiocarbon dating and determined that the imprints might be up to 22,800 years old. Many experts believe that prehistoric migration occurred across a land bridge that linked Asia to Alaska.

Others, however, believe that people arrived in the Americas around 13,000 to 26,000 years ago, based on empirical evidence such as primitive tools, fossilized bones, and genetic research. “This study demonstrates the process of science – fresh data may change long-held beliefs,” stated USGS acting Rocky Mountain regional director Allison Shipp. While the footprints discovered in New Mexico indicate that people were present in the region at that time, they might have arrived much earlier. White Sands is well-known for its unique gypsum-based dunes. According to the study, which was published in the journal ‘Science,’ fossilized footprints are more reliable than “culture artifacts, modified bones, or other more traditional fossils.” The footprints, at least several of which, are thought to have been made by children and teens during the last ice age, were characterized by the scientists as “proof of a solid location and time.” “We realized they were old, but we had no means to timestamp the prints until we found artifact seeds above,” stated David Bustos, White Sands’ resource program manager, who discovered the initial footprints in 2009.

Because the footprints are comprised of tiny silt and clay, the scientists had to collect samples fast. “The only way to conserve them is to document them – to take a lot of photographs and create 3D models,” Mr. Bustos explained. Experts from the National Park Service, Bournemouth University, the University of Arizona, Cornell University, and the park’s Native American partners supported White Sands National Park and USGS scientists. White Sands National Park is an archaeologist’s dream, containing the world’s biggest recorded collection of ice age petrified footprints. Tracks from Columbian woolly mammoth, saber-toothed cats, dire wolves, and other ice age creatures have also been uncovered. “These remarkable results demonstrate that White Sands National Park is not only a world-class recreational attraction but also a magnificent scientific laboratory that has generated pioneering, basic research,” stated Superintendent Marie Sauter.