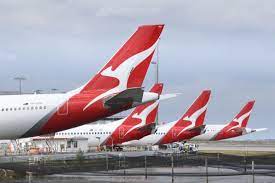 Melbourne, Australia – The main airline of Australia, Qantas, announced on Thursday that after three years of economic turbulence, which cost the airline $17 billion in revenue, operations had begun to improve.

Chief executive Alan Joyce remarked, “These figures are astonishing, and getting through to the other side has obviously been difficult.” “We always anticipated a significant increase in travel demand, but the speed and scope of that increase have been unprecedented.”

With 20 new routes established to accommodate the request for leisure travel throughout Australia, Qantas claimed that domestic travel was above pre-pandemic levels by the end of June.

An “offset by a record performance” in the group’s freight sector, which still lags behind 50% of pre-pandemic highs, was the slow recovery in overseas travel.

However, a year marred by Omicron and Delta wave lockdowns, which resulted in a third consecutive deficit before tax of AUD$1.2 billion (US$830 million), was not made up for by the Q4’s surge in travel.

Qantas announced that “the existential danger posed by the pandemic (was) now past” and that it would turn its attention to operational difficulties when it released its full-year results on Thursday.

The airline ordered its senior executives to work as luggage handlers earlier this month due to a major labor shortage that affects Australia’s long-locked-down economy.

The decision was contentious since Qantas had fired 2,000 ground employees during COVID-19 lockdowns, which Australia’s federal court decided in May was an illegal mass firing.

To the High Court, Qantas has committed to file an appeal of the judgment.

Earlier this week, Qantas passengers were apologized to by Joyce for the protracted delays at airports throughout the nation as travel picked up. He also offered frequent fliers airline vouchers worth AUD$50 to show his sincere regret. “Several may have had flights canceled, flights delayed, and luggage lost over the past few months. It’s not good enough,” he added. “I want to apologize on behalf of the national carrier and reassure you that we are making every effort to resume performing at our peak.”