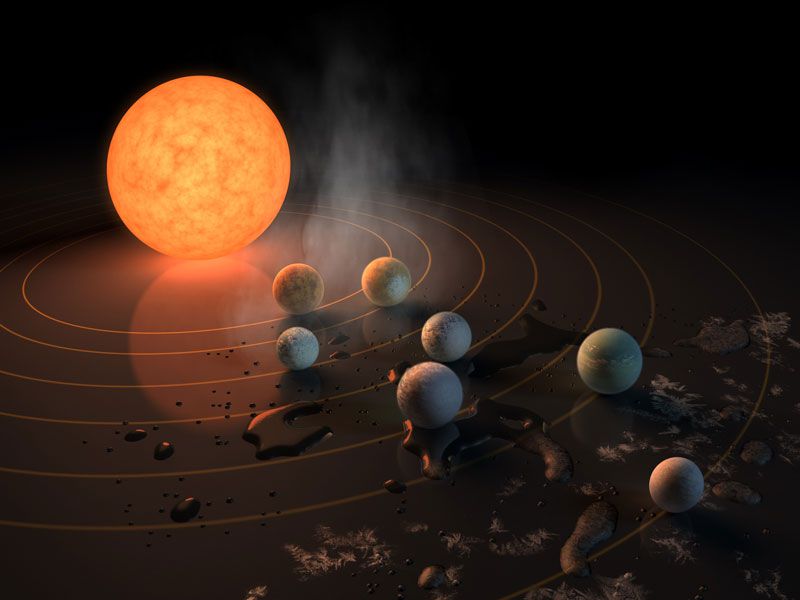 A new scientific paper has predicted that planets currently orbiting TRAPPIST-1 are likely to be made of similar stuff. According to past calculations, these planets measure similar to the Earth’s size. Their mass is also close to Earth’s. They are likely to be rocky and not gas-dominated like Jupiter and Saturn. TRAPPIST-1 was discovered in 1999. Astronomer John Gizis led team had discovered it. The paper said that the TRAPPIST-1 system is home to the largest group of exoplanets. These exoplanets are roughly like Earth in size and are ever found in the same protoplanetary system. The distance between Earth and TRAPPIST-1 is approximately 39.46 light-years. It hosts seven Earth-sized planets. These planets circle a dwarf star which is ultra-cool

The latest paper provides the most precise density measurements of exoplanets. Exoplanets are basically planets that are located outside the solar system. Proxima Centauri is Earth’s nearest exoplanet. It is situated at a distance of 4.2 light-years from Earth. Other than the Sun in the solar system, these planets also orbit a star. According to an estimate, there are more than 4,000 exoplanets. The paper said that these seven planets are similar in density. Their values are quite common and differ not more than three percent. It noted that understanding a planet’s density more precisely helps scientists know its composition. When the density between the TRAPPIST-1 planets and Earth is compared, it is just eight percent. However, on a planetary scale, this difference is significant.

Some of the TRAPPIST-1 planets are known since 2016. Scientists had announced to discover three new planets around it. Scientists made the discovery using the robotic telescope TRAPPIST. It is based in Chile. The subsequent observations made by Spitzer Space Telescope confirmed the presence of two planets. It also discovered five more planets. The telescope was made by NASA. It was an infrared space telescope. It was launched in 2003. NASA retired it in January 2020. It was also called the Hubble Space Telescope’s cousin because it allowed astronomers to study space in the infrared.