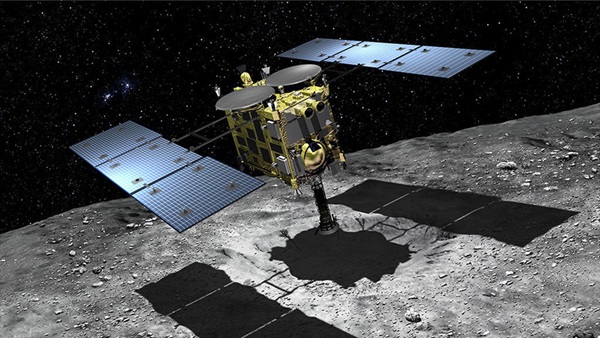 Japanese spacecraft Hayabusa2 has returned a space rock to Earth. The spacecraft has returned rock from the asteroid Ryugu. It landed in a barren region in South Australia. It dropped the capsule containing the precious sample. Scientists believe that a detailed study of Ryugu’s sample will help the community better understand the solar system’s evolution. According to JAXA, the Hayabusa2 re-entry capsule separated from the spacecraft as planned. The capsule landed in Woomera. Scientists conducted a short analysis of the sample container before it was taken to Japan by a charter flight. The capsule will be opened in Japan itself. This is the second time when Japan has returned samples from an asteroid.

The capsule turned into a fireball briefly soon after entering into Earth’s atmosphere. A parachute was opened when it was six miles above the surface. The parachute lowered the speed of fall. JAXA said that beacon signals were transmitted to indicate the capsule’s location. The search team collected the capsule. Hayabusa2 collected samples from asteroid Ryugu in July 2019. The mission was launched in 2014. It landed at Ryugu in 2018. Hayabusa2 is a successor of Hayabusa which was launched by the JAXA in 2003. It arrived at the asteroid Itokawa in 2005 to collect samples. The samples were returned to Earth in 2010.

According to JAXA, after two hours of the capsule’s entry, its search team found it. The capsule was found in the planned area. The plan-shaped capsule is 15 inches in diameter. The fireball could be seen from the ISS. Hayabusa left Ryugu a year ago. The capsule separated from the spacecraft and started descending from 136,700 miles in space. Ryugu is approximately 180 million miles away from Earth. It was discovered in 1999. It is designated as a near-Earth object and a hazardous object of the Apollo group. It measures approximately 0.6 miles in diameter. It orbits the Sun. It takes 474 days to complete one orbit. JAXA released the first image of Ryugu in 2018. The image was sent by Hayabusa2.